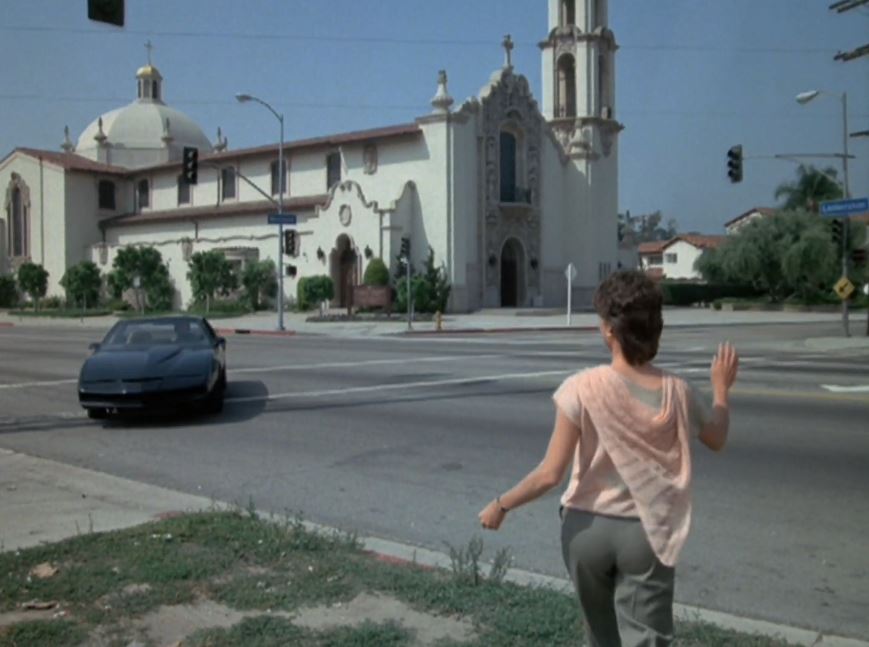 So I awoke this afternoon to the sweet smell of hellfire in the air... that certain scent that betokens only one thing... burning church! Yes, but none other than Saint Charles Borromeo Catholic Church! It is sort of a bittersweet contemplation, considering this is where I attended Jr. High, but also considering the sublime architecture therein, as hypocritical as it may be, yet still it should be preserved, regardless of the religious connotation. I do not mind whatsoever the large protestant churches, which are essentially large sheeple warehouses, but the intricacy of this Spanish design & artistry. It will no doubt be replaced and restored in no time, considering the immense resources of this major pseudoxian organization, but it would be very interesting to see who the culprit is, and if I know them at all.

Damage included spilling holy oil on the floor, a couple of upturned pews, scattered hymnals & periodicals, toppled statuary, candleholder sticks, broken glass, and some burning {it appeared someone had attempted to use documents to alight the wooden pews, but did not ignite}.

It turns out that the Cha$e bank down the street was also vandalized, which may be a statement against religion and the corrupt finance shenanigans of the banksters. Plus, one Roger Mahony resides there, who was influential in the obfuscation of much of the Catholic priesthood's pedophilia in the LA area under his corrupt administration. [Chronologued in The Curse of Candlemass 2013 Judgment Day]. Churchway, on the other hand, was a welcomed immolation, because it was a regular building with little to no character, with odious occupants, like the aforementioned warehouse. If so inclined, it could be posited that the subject was as if "possessed" to enter in and defile the sanctuary... ∞ 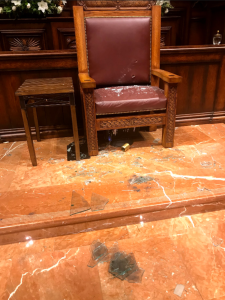 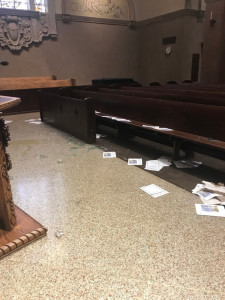 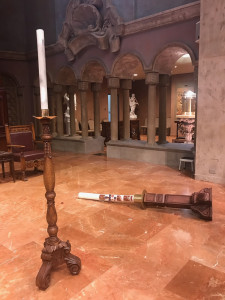 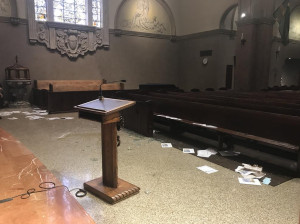 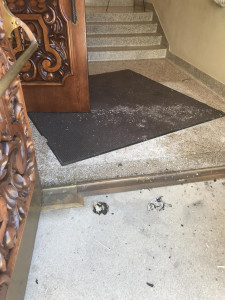 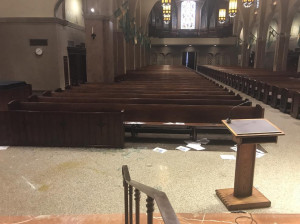 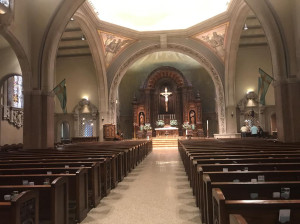 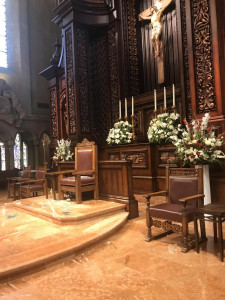 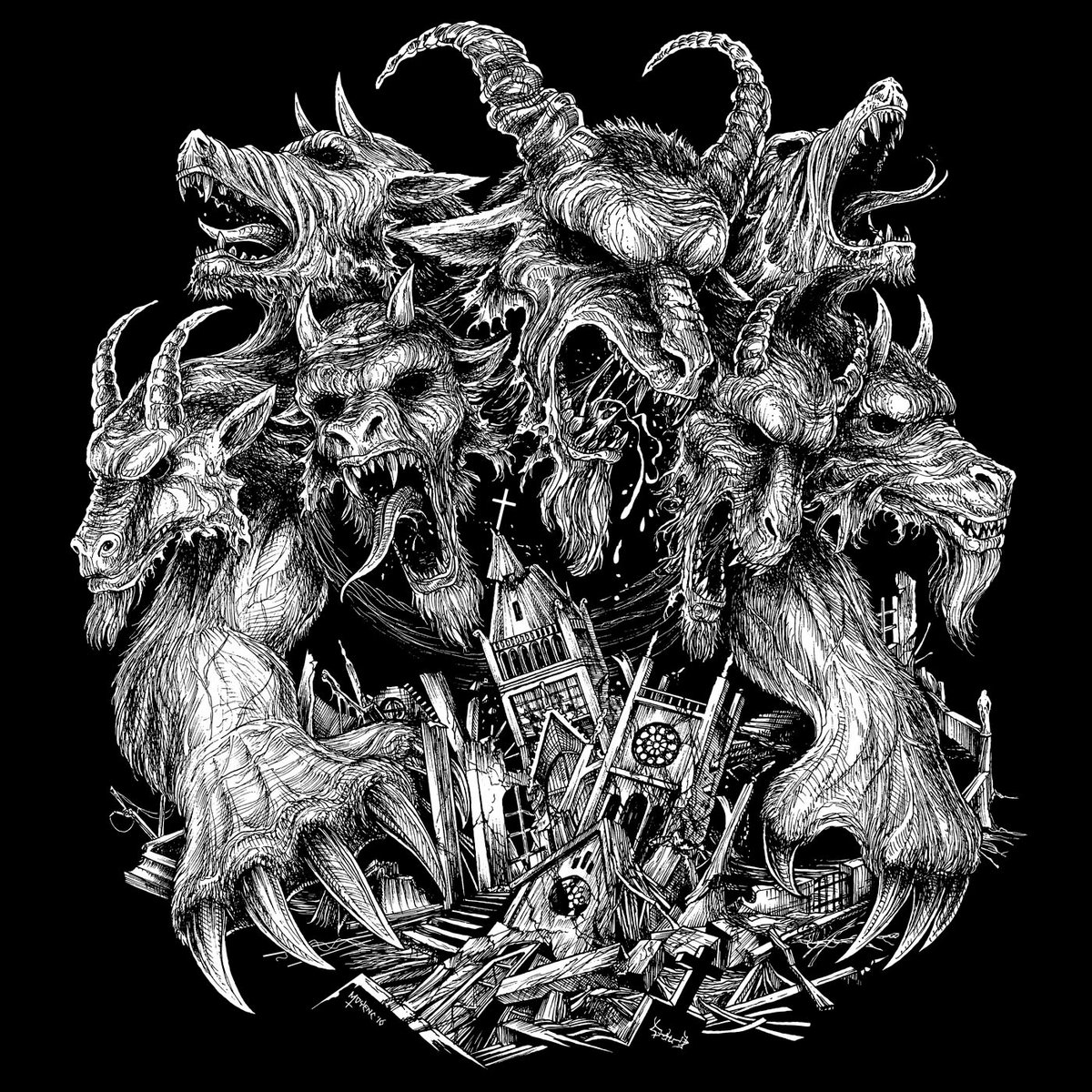 7/26: Msr. Gallagher has 'perished'. This precisely almost 24 hours within the time of the sacrilege. I knew him while he was presiding at SC, and officiated mass.

This Sacrilege may have influenced by the composition of 13 Keys, considering the concluding paragraph very specifically describes Messe Noir Apotheosis, Catharsis and the triumph of Lucifer. A manifestation of Demonic Power. The church is in relative close proximity, directly related to Myself in the sense that I attended Jr. High school there. My hooves tread therein in formative development.

Personally, I would love to see this church transformed into a private Satanic Church & ChapHell, residence, with a brothell as convent. Thus remove 'the hanged man' from the wooden edifice / tabernacle, replaced with Baphomet. Not open to the public {except for perhaps The Devil's BrotHell to generate funds and provide a service}, but choice individuals and Citizens of The Infernal Empire. ∞

UPDATE 7/31: [ITEM] Suspect vandal arrested: Some vagrant named "Russell Congleton" has been arrested for the crime, though motive remains unclear at this time. Perhaps he necessitates a holy enema with an Exorcist rectal syringe? Just a vessel for a means to an end. ∞UPDATE 8/2 [ITEM]: Msr. Gallagher's Funeral: The Catholic clergy are wearing the appropriate colors for the event {White represents hypocrisy & death in the Satanic Religion}. Could it be that this cleric was so attached to his church, that the very act of vandalism was a direct blow to his person? He died the very day after the vandal struck, and became a somewhat fitting 'sacrifice' for the Tridecahedron Rite to manifest, and the Bloodthorn Manor opus? Seems very likely! All this is bittersweet only in an evocative, nostalgic sense. ∞