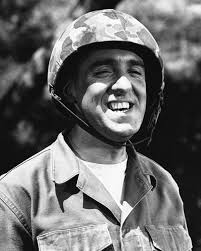 So Jim Nabors died... I heard they found him bobbing on the Hudson! Well Gollee! Talk about "love thy nabor!"*

Honestly, I thought he died some time ago which is proving to be somewhat of a so-called "Mandela Effect"! Or selective memory, false memory, to be more precise. Honestly, I thought he died like in the late 80's/early 90's or some such. Perhaps in order to retire peacefully without being sought out by media and fans, false news of death is announced - I think this occurs a lot amongst çelebritards.

Anyhow, I'm only familiar with the character Gomer Pyle, which I never watch at all, and just remember him being some goofball retarded military character, very much reminding Me of that joke poser Sgt. Xcrement, or Abner to Retardo's Gladys Kravitz, with the hysteria and rude intrusiveness. ∞
_____________
* Jim Nabors and Rock Hudson were lovers - so what? That's their personal life to do what they want.