Of course, one of the benefits of a steady series if motion pictures or television productions is the increased availability of items with favored characters in just about every form imaginable. So it was a pleasing surprise to spot this item recently.

At first glance, it sort of looks like an interesting cross between a Shogun Warrior and Vader {I did own the 12" Vader & Boba Fett}. Here, the Dark Lord appears robust and even stronger than usual, as if pumping iron in space. There's a seperate joint with a detachable fist and lightsaber inclusion as well. Does the fist launch?

The play purpose of this battle figure is to blend with others in the line, each with their own detachable parts to combine appearences like hybrids.

Besides Vader, there's Stormtrooper, Bossk, 'Kit Fisto', and many others including Han Solo, Darth Sidius, Boba Fett, and more. As to the figures themselves, these have a sturdy, heavy duty quality and are detailed well.

Overall, interesting idea, but I think I like each character just the way they are.

At any rate, this figure certainly looks fantastic in one's collection. ∞ 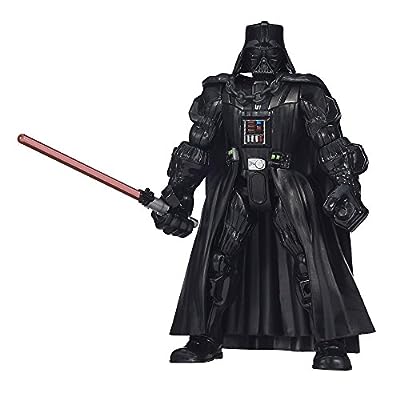