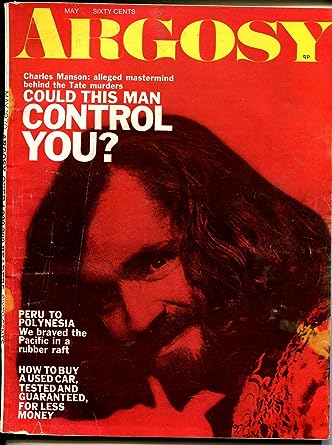 A magazine that "appeared" one day, the enigmatic image remaining memorable.
Man[son]ic mess/iah

My first recollection of Manson was from periodic appearances of court hearings in the news from time to timeless, and a much enjoyed criminology encyclopedia entitled "Crime & Punishment: A Pictorial History of Aberrant Behavior", then much more so on The Geraldo Rivera Special "MURDER: Live from Death Row", and subsequent scenes in "Exposing Satan's Underground", in which he is displayed jumping around like a lunatic jester. I have found his antics amusing, who had some minor philosophical worldly insights now and then when reading between the lines.

Yet he became the face of insanity with the long hair, unkempt beard, and schwaztika forehead tattoo, a psychotic hippie cult leader, a veritable "Hellbilly" as it were, and wild mountain man. A kind of primitive dancing around a bonefire telling stories of hunting exploits.

Though he never actually laid hands on the victims of those murders, perhaps this was a sort of hazing rite demanded of his so-called "family", that they would be part of history in bringing on "helter skelter"* - yet through his drug-addled haze, it seems that it was ultimately he who was instrumental in bringing about the end of hippie culture when the so-called remmus of love became one of hate, when Magus LaVey's Curse took effect almost immediately as he stood there in the shadows holding forth The Ring of Nebalungen out towards the filthy masses, transmitting forth The Devil's Hook thereunto as an adjunct to The Rite of Coming Forth By Night, to be rid of the psychadelic vermin infesting his beloved city once and for all. And so it was done.

Manson clearly considered himself as more of a Jesus figure in both appearance and lifestyle, as that of the nazarene, a wandering vagabond squatting in an abandoned spaghetti western movie set and former farm named "Spahn Ranch", which did indeed spawn wretches preying on drifters, tourists, and other junkies and runaways, who may still be buried in those no man's lands they roamed, some of whom became part of the family cult, many of whose traits became more or less replicated in productions like The Devil's Rejects.

In another bit of separation was the time when a future member of that cult named Susan Atkins would participate as a vampire stripper in a LaVey production for a short stint before moving on to oblivion. She recounts the extent of her interactions in her book "Child of Satan, Child of god".

Despite irresponsible, confused, convoluted reportage with either none or a very visceral, uninformed understanding of Satanism; during The Satanic Panic, Manson was lumped in the same general category as devil worship, Voodoo, Santeria, Palo Mayombe, even a Hinduism conglomeration, although he is much more comparable to a desert dwelling madman vagrant with a messianic complex, as was the comparison he himself preferred. The schwaztika was probably more for shock value with vague inferences towards tantric symbolism if anything, as was fashionable at the time. ∞
_____________
* The term of which derived from a Beatles song, though I became familiar with by the more preferable Motley Crue version.