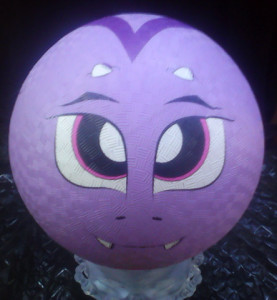 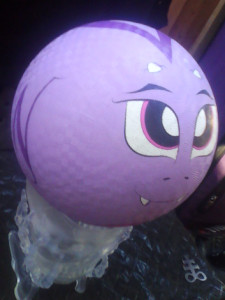 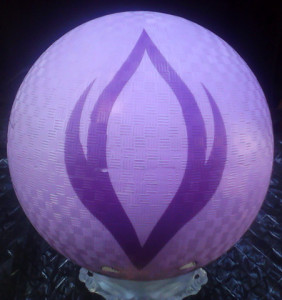 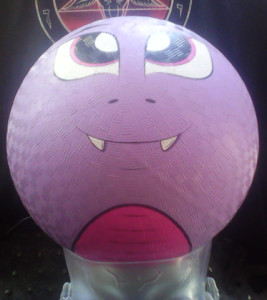 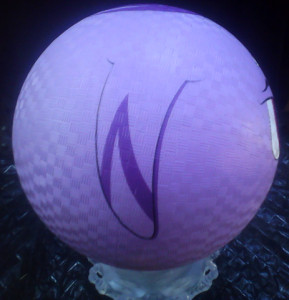 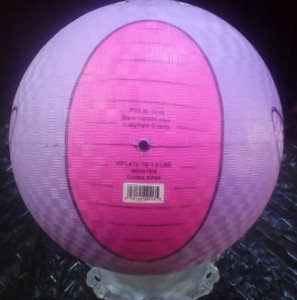 Baden made a baby Baphomet handball! I 'kid' you not! While possessing confections at a local market the other night, I spotted this little fellow {or "Baphomette", perhaps?} awaiting an appreciative Lair to go to. When lo and behold, go tell it on ze mountain, it depicts a remarkable little demon goat possessing many of the characteristics of that beloved, sinister symbol. Upon observation, there are the horns {nubs in this case}, eyes shape, brows, flared nasal passages, even forehead striations and ear configuration. Plus, there are fangs... and a pink belly.

When I ponder handball, I Am taken to Hellementary school, 1-4th grade, out to the yard handball courts which draw major attention. The other being the sadomasochistic "dodgeball", which is basically a fun way to torture classmates in the name of good sportsmanship, which was actually banned due to some students becoming injured as a result of "playing" this, who suffered bruises and probably head trauma as well. It was a fun way to get disliked classmates {under the pretense of "playing", of course}, or a desire for acceptability {read: hazing}, and beat the living shit out of them with a rubber ball, sometimes with a volley or basketball!

As to handball, however, it was the 'cool' thing to do, with the killing move always being the chop, which is chop-striking a ball as low as possible at the wall, wherein an opponent could not return strike it well enough for a proper hit, thereby granting the victory. It was a temporary amusement at the time.

The làst time I played was at a former acquaintance's alma mater which contains courts. It came surprisingly easy, frustrating his efforts as he continually attempted to find something he was better at, from handball, boardgames, obstacle courses, drawing, etc., but never could.

Also available by Baden in that Halloween ball basket, is a Jack o' lantern and green alien with antennae. Overall, it is fun to illicit some cardiovascular playtime to activate those accumulated proteins, whether at a park, field, court, or back yard at home. ∞