Hefner had it made. Residing in a palacial mansion, maintaining a veritable harem, did what he loved and was paid for it. All while in smoking jacket and silk pajamas, with a glass of fine wine in one hand, and fine women in the other.

Though I personally eventually gravitated more towards Hustler, Penthouse, and the like, as My prurient interests grew, the ravishing vixens presented herein upon this altar of lust were always sexquisite, and always remained an option, a veritable gateway to those beauties in various other genres to sexpress themselves erotically, showing other dimensions of themselves besides what they are primarily known for, revealing to admirers what was also desired of them, what was also being secretly contemplated.

In a way, Hefner, along with the likes of Larry Flynt and others, became that serpent in the gardens of lust, whispering through the trees, offering the forbidden fruit in the form of those playmates, thusly contributing to awakening one's carnal nature, and one's own kundalini serpent to emerge.

So as one's curiosities bade in formative development, and furthermore bid one towards sexploration and sexperience, I tip a horn to those fellow devils of the flesh who make these inspirational, motivational, stimulating spectacles readily available. ∞

dblackthorne at The Devil made me do it at...
THE BLACK EARTH

As a result of certain associations & negotiations with the adult entertainment industry at the time, I was invited to Hugh Hefner's Halloween shindig. In order to even enter the mansion, one had to board a "party bus", as it were, parking one's vehicle just down the street at a nearby parking structure in Westwood. We met with our associate & looked forward to an entertaining night, indeed. 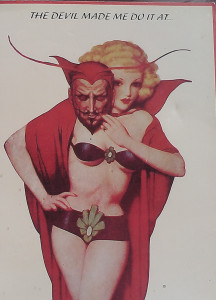 Though the music was not necessarily of My personal preference, one could migrate to other parts of the grounds for different sonic & visual experiences. There are hidden little nooks & pathways throughout, benches, even a little cabin in the thick of foliage, all to serve as ideal spots for clandestine encounters with whomever mutually wills. The usual press was present from several channels and shows, snapping shots at all the elaborate props, media 'personalities', models, & of course, "Hef".

However, everyone was dressed in Halloween splendor, from the ubiquitous vampires, werewolves, clowns, princesses, various sexy Disney characters, and the staple 'bunnies' serving drinks and hors d'oeuvres. Myself, I chose to dress in sort of Black Magic Sorcerer meets Count Dracula attire, where the features on the face are accentuated, enhanced widow's peak, hair slicked back, while still preserving an elegant presentation, all topped with a subtle Baphomet lapel pin & ring; while My lovely consort was regaled as a Sexy Witch.

Then there is the infamous secret grotto wherein couples, and sometimes more, have been known to steal away for some carnal pleasures in the dim lighting flickering off the stone walls surrounding, & shimmering moonlight.

Eventually, Mr. Hefner appeared with his gaggle of bunnies, dressed in his perpetual smoking jacket and pajamas, although topped with devil horns, this time around, which I thought was rather appropriate after all, for a self-made man who built his empire on the contemplation of fleshly delights, enjoying his success to the fullest, residing in such an impressively opulent mansion, quite inspiring to be sure, & obviously completely de-facto Satanic.

Wonderful complimentary libations enjoyed, as provided by our gracious host, accompanied by a feast fit for a Beast, with additional pleasures yet to come. ∞