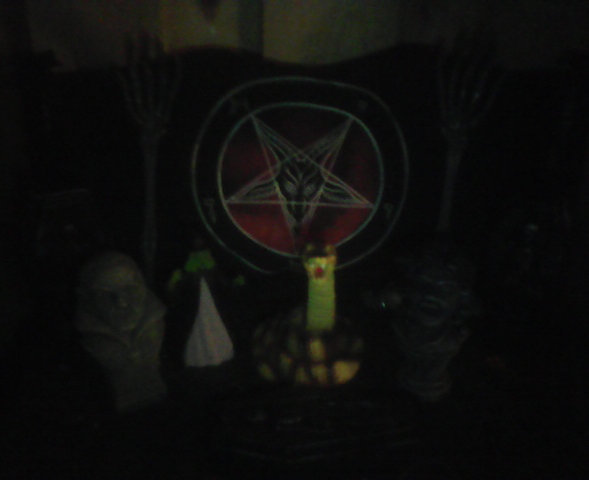 Another foray for Hælloween oddities yields a few more amusing and playful items of interest.

Skeleton Arm Tongs: Besides the recommended usage, I also found that these make for good backscratchers as well. Made of solid materials, these can be useful for a number of things, including a reaching apparatus, or a hat or coat hanger.

Coffins: Very useful for effigy preservation {for a Construction of Destruction parchment container before and after immolation}, combined with graveyard dirt for sacrifices, or just as a keepsake.

Lightup skull mug: A colorful variation of drinking from the skulls of one's enemies. Cranium lights up when filled with bloo... liquid of one's choice.

Serpent figure: Serpent of The Deep, Jormungander, Set, Apep, Midgard, Damballa. Kundalini's flame, thou who offers the forbidden fruits of carnal knowledge awakenings; cunning & undefiled wisdom. Whispering death, graceful & deadly. Thou who slithers into the brain to release the darkness within.

Dracula & Medusa busts: Made of stone, actually pretty well rendered tributaries to a couple of legendary darketypes. A hellegant Lugosi/Lee variant in feeding mode with deadly fanged rictus depicting these fearsome characterizations in lethal symmetry - for most, the last thing they will ever see is gleaming eyes and predatory countenance deep in the shadows of nightmares. Ironic that the Gorgon is represented in stone, no less.

Wicked Witch figurine: The veritable "Mother" or "Sister" Halloween classic representation. Spotting her is always a Magical evocation, bringing the season to full fright. She is motion sensitive, lighting up and cackling ghouleefully when someone approaches. Very useful as a sensor for monitoring purposes.

Mini skulls: Ideal for making beaded necklaces or garlands, or perhaps leavinga small memento mori in select locations for a special hex withersoever one may travel to radiate a certain malediction towards those who deserve it.

Black & red flamingos: An underscored side dracoration with a touch of evil to these zombie or possessed birds roaming the grounds. They are rather peckish with a taste for passersby. ∞ 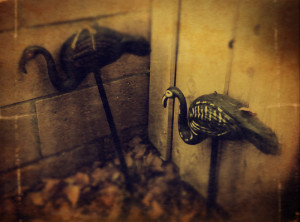