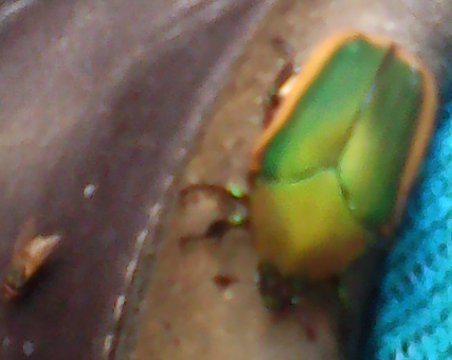 My little friend appears to be molting now, and is apparently all healed up from some previous misadventure, which rendered him earthbound for a day, where he rested up. Today he actually landed upon a boot, as if to state appreciation from yesterday’s tumbling around in the foxtail grass. I think either his wing or leg may have been injured; flipping him over while spinning around on his back.

He looks like a flying emerald! Quite a blessing indeed, and a tiding of good omen – Immortality, resilience, rebirth, and strength. Ave Setanas. AMON. ∞

So now not only the Keprhi virtually resurrect from his injured condition, but this afternoon I discovered a beautiful spiderweb gracing the side gate, which always portends wealth, an expectation of financial surplus, & things material; favorable possessions.

As scarab beetles represent Strong Life and Health, so arachnids represent Wealth. Yet another tiding of good omen!

But also, considering a recent justified recourse for punishment upon deserving sacrifices, & the timing of such, to be formalized upon the forthcoming eclipse, this construction for destruction seems appropriately omenic as well, as a veritable confirmation of Is-To-Be Diabolical Machination materialization.

Posts from This Journal “animals” Tag