The Battle of Baldwin on The Pacific

So there was a time wherein Devin Black {'Satan'} and the 'Deathbangers' were walking forth towards some destination in the night, when some lame ass thumper car went driving by, complete with some sort of ,disparaging remarks, that merited a rock thrown precisely through the side rear window. Not long after, we continued on our way, some came at us with bats and sticks, though what was available nearby, but long steel rods, which were immediately accessed and used as veritable spears to practically impale the assailants, rendering them crouched and running for their lives - such a victory was invigorating, and hearkened to scenes from Highlander. And My martial arts training no doubt proved very valuable that evening.

Apparently someone had notified Police of the events, as several squad cars were spotted in the vicinity. Not desiring this interaction, I swiftly turned down into a street and silently blended into the shadows, calling upon Satan & His Demons to aid Me in a safe, undetected trip back home. My return to The Noctuary was indeed a stealthy one.

Now, I was in the habit of always carrying My Satanic Bible with Me in the left inside pocket of My black vest, along with all the patches, spikes, studs, and chains, but also certain Goetic seals for experimentation in various situations for various purposes. For this disapparent effect, along with the darkness, among others, present seals must have been that of Baalam & Baal, both of whose attributes are that of dispensing invisibility. I also recall the name Sabnock.

It was later related to Me from those detained, that the Police were indeed asking about Me, per description, and where had I gone. They were told that I go by the nickname of 'Satan' and of My occult interests. The cops agreed that I must be, because I was nowhere to be found. Afterwards, the night was met with celebration.

Interestingly, the location now features an appealing rock castle structure... could it be that certain forces were unleashed that night, causing a connection with that land, thus rooting daemonic energy to eventually establish a Goetic Temple wherein secretive ceremonial rites are performed? ∞ 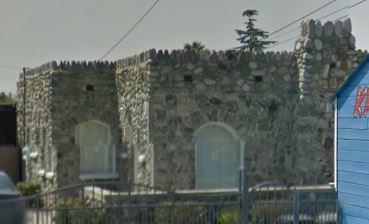