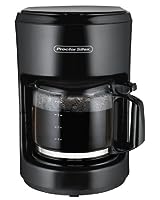 A recently acquired coffee machine with the villainous name of “Proctor Silex” sounds like a transformer Autobot or Shogun Warrior when no one else is around, and rather like KR episode Knight of The Drones.

In a Zarvox or Cylon Centurion voice…”How would you like your coffee?” [ICED] “…As you command”. Otherwise looks like it could very well be what one may see on The Death Star. Or maybe even another X Man? But it may make for a fantastic scifi villain along the lines of Ming The Merciless or the character from When Worlds Collide.

As to the quality, it is an optimum, prime production for the time being, and an easily transportable percolator; the chord folds up neatly into the casing, great for small personal servings of up to 10 cups*; it is black on black in coloration, featuring a beady red light rather like an electric eye somewhat like Terminator’s peering through the dark, reading your retina, recording your every move, ready to stun with the permeating rich aroma of a Belialian brew.

While something like a “Mr. Coffee” is designed for a friendlier construction, apart from it being shaped like a tower with a dragon entwining round, or even a Luciferian lighthouse, Proctor Silex is an infernal machine complementing a darker Total Environment. ∞