The Demon & The Horns 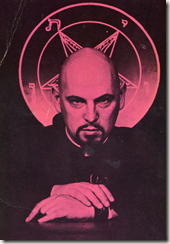 It is amusing to consider that during The Satanic Panic, KISS for a time attempted to disassociate itself with the purported acronym dubbed by frightened Christians as meaning “Knights In Satan’s Service”*, since somewhat exploited, but now have come down to this through Simmons’ recent posturing.

Profoundly, The Cornu means The Horns of Satan ascendant, with three descending in opposition of the holy trinity and spiritual belief systems, or even 666 {Unholy Trinity} as foundational of the carnal, The Beast in man, The Humanimal, Hell & Earth, reason and instinct. And I will add Satanic Victory as well. It is a further confirmation of The Satanist unto The Forces of Darkness.

This gesture could not possibly be trademarked, but perhaps whom does so photographically at the time while in total character, but not for everyone else. But granting the benefit of the doubt, perhaps it is not The Cornu itself, which has an Occult tradition spanning millennia as referenced in grimoires, but the combination with the protruding tongue as well, rather like the Krampus, but should that also be attempted to be trademarked?

Not only that, but the gesticulation demonstrated by Gene Simmons in performance has always been that of “I Love You”, with the thumb extended sideways from the hand, which has been the long established sign language gesture that was made infamous by this character in the band KISS, yet even before that as Spiderman's webbing gesture - so should Stan Lee sue Simmons?

While it surely does accentuate the demonic character, but if the case is an actual attempt at “trademarking” the actual Cornu, a gesture that has long since been the unholy symbol of the Horns of Satan used by diabolists for probably centuries, then it may be a disappointingly pretentious attempt at “owning” such a dark historic folk gesture, again, affirming The Devil. Perhaps a gratuitous attempt to make even more money, an insecure grubbing to maintain entertainment legacy, and/or a sadly desperate vie for attention… or perhaps a steady losing of marbles.

As far as it being used in the media, that was first demonstrated by The Church of Satan’s Black Pope, Magus Anton Szandor LaVey on the Joe Pyne Show, then subsequently by even The Beatles, ‘occult rock’ band Coven, then Ronnie James Dio {as the cornuto, warding off the Evil Eye}, and many others since. Still, the common populace probably see it as nothing more than meaning just Heavy Metal and Rock. ∞

Addendum: I have long since appreciated the theatrics of all the KISS characters, and shall continue to do so for amusement or inspiration, but have resonated most with The Demon, for obvious reasons. Yet the personal lives of the performers are another issue altogether, and should remain in their proper places.

Furthermore, I have a suggestion for an even better gesticulation that would be far more appropriately descriptive of the KISS demon characterization: Consider The Cornu but with the two descending fingers resting upon the bend of the thumb, which protrudes forwards and downwards like a tongue - now that would be unique! Or otherwise may be indicative of the horns and demonic tongue of Krampus, Krampus Klaw, or Kornu.
____________
* I also recall the picky, petty debacle with Mercyful Fate King Diamond over the frightmask makeup, which was absurd, considering there is absolutely no confusion between the two. Diamond's demonic appearence evolves anyway.
Tags: 666, anton lavey, anton szandor lavey, church of satan, commentary, essay, history, infernal empire, king diamond, malefick musick, metal, nefarious news, occult, satanic panic
Subscribe