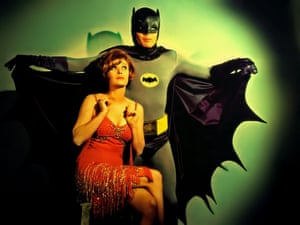 Actor Adam West funtastically portrayed a rather goofy version of The Dark Knight, as a sort of Batman lite, as it were, with only generalized similarities - the gray costume, purple & black accessories, yellow utility belt, husky physique, etc., vastly deviating from what Bob Kane intended, which was a much darker, even demonic persona.*

I had also read the actual comic magazines and illustrated books, who, kind of like the ‘Evil’ Addams Family, bore much more lethal characteristics in these forms, than the subsequent lighter television series, which is entertaining for what that is, as a sort of comedy-action presentation. Yet still, The Batman has always piqued a more sinister representation.

Those so-called “ears” on the cowl always looked like horns to Me, and the character is probably the most plausible incarnation of such an icon overall. It was subsequently revealed that Batman is actually a Ninja, which is completely believable, as the similarities are almost identical, what with being shadow warriors, nocturnal, utilizing a plethora of ingenious weapons/tools, and adhering to what I have always felt is a very Satanic discipline, even employing elements of Sorcery, as well as being completely carnal in the identity of Bruce Wayne.

Well sure, I dependably watched the comedic Adam West variety, with all the colorful villains, sexy vamps & heroines therein {I’ve always had an eye for Batgirl}. The Joker is perfect in the cartoonish series** as is The Riddler, The Penguin, and Catwoman, for that matter, with Robin always being rather questionable. The Batmobile is surely an optimum manifestation herein – the other being the sublime Tim Burton version.

In a way, it preserved this darketypal antihero in the societal subconscious, and in many since, the shadowside, the bat that flies by night, unquestionably connected to the god-like vampire as well, born of the nocturne tide, in a plethora of amusing to fearful shadowy delights. Whereupon, whenever in the mood, one can always tune into the same bat channel, same Bat timelessness. ∞

_____________
* I possessed the Mego figures with Batman, Robin & The Batmobile among them, always providing for a most amusing playtime.
** The Tim Burton versions are incomparably darker, and more to the Dark Knight characterization.