On the occasion of Magus Gilmore's High Sabbath, it is cause to ponder some of My associations.

The first familiarization was through The Black Flame publication in the role of Editor-In-Chief & contributor {Issue 4 to be exact}, which I discovered on the shelves of Tower Records, around the time when The Devil's Notebook was released, and Magus LaVey was conducting a series of interviews with various publications, including TBF. It is always a devilish delight to read the introductions & essays from Magus Gilmore therein.

When the official site was launched, I heartily joined Forces. Contributing Magus LaVey interviews from books "Occult America" by John Godwin and "Everything You Ever Wanted To Know About Sorcery... But Were Afraid To Ask!" by Arlene Fitzgerald, later the Monologue from John Fritscher’s Popular Witchcraft concerning Magus LaVey, & "The Satanist Who Wants to Rule the World"; artwork entitled "The Black Pope" in the Tribute Gallery, a couple of personal variations on the Baphomet sigil; more recently on the Downloads page, illustrations of The Nine Satanic Statements, Sins, and The 11 Satanic Rules of The Earth, as well as two collaborative poetic/musical pieces with Dorian Grey entitled "Lucifer", and "The Garden of Dark Delights". Videos seen throughout the site featuring interviews with Magus Gilmore on The Hour, 20/20, the Church of Satan segment from the "Satan In The Suburbs" documentary, and Pact With The Devil featuring My own ritual performance and Magistra Barton interview.

It would eventually be an extraordinary evolution to have one My own pieces featured in issue 16 entitled "Aristotle: The Satanic Philosopher" along with My film review of The Black Cat in the Odditorium section; eventually yielding an interview included in The Devil's Diary XVIII with "River God" featured on the cover. When I conducted a ritual for the Pact With The Devil presentation on The Discovery & The Learning Channel, we diligently corresponded to perfect the rite.

As to the music, I saw an advertisement for the Black Metal band ACHERON's Rites of The Black Mass* premiere opus in one of the issues, which features the actual litany from Le Messe Noir {The Satanic Rituals}, so I sent for it forthwith, and was quite pleased by it - both by the demonic intensity, and by Gilmore's potent enunciations. 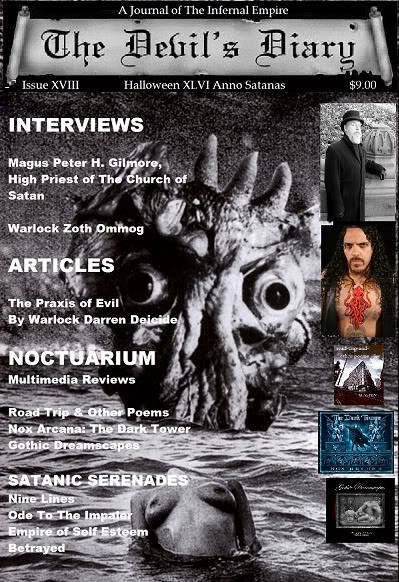 It was gratifying that Magus Gilmore cooperated with these musicians for subsequent releases such as Lex Talionis {Law of The Talon}, Hail Victory {The 9 Satanic Statements}, Anti-God, Anti-Christ {selections from "The Antichrist" by Friedrich Nietzsche}, and Those Who Have Risen** {Nosferatu Prelude} - the latter in which was even included a portrait of Magus Gilmore in Vampiric metamorphosis. I eventually selected all of the Magus' pieces from the CD's and burned them onto a recordable CD for personal listening. So when Threnody For Humanity was released, I possessed My copy soon thereafter to add to the collection.

I had also heard him on Bob Larson's entertaining Talk Back show {both radio and the In Satan's Name presentation}; in a program that was routinely filled with subhuman detritus, it was refreshing to have an actual Satanist & Church of Satan representative interviewed.*** I later found out he was also on Sally Jesse Raphael once as well, throughout the Satanic Panic, and many, many more since.

A prized possession is The Satanic Scriptures slipcase edition {along with the soft cover version}, not to mention The Satanic Bible with new introduction. I had the pleasure of making his acquaintance at The 666 High Mass events, and found him gracious, intelligent, and most articulate. It was also mentioned how our attire coloration was very similar. From one Devil to another, Our clandestine and public interactions have been mutually admirable.

Since Magus LaVey's infernal bestowal, The Captain has steered this mighty Galleon like Charon upon the river Styx in Hades, through Leviathan's raging sea upon placid and rough waters alike, cresting upon a plethora of hellish shores, as we look forward to another Quinquagenary and beyond. ∞

_____________
* Which happens to be the first CD I ever purchased. Amusingly, as I recently played it, along with the sensation of infernal bliss, a pet cat began regurgitating.
** Also in cooperation with The Temple of The Vampire.
*** As was Magistra Blanche Barton, and others. He himself would later be interviewed in The Black Flame V.5