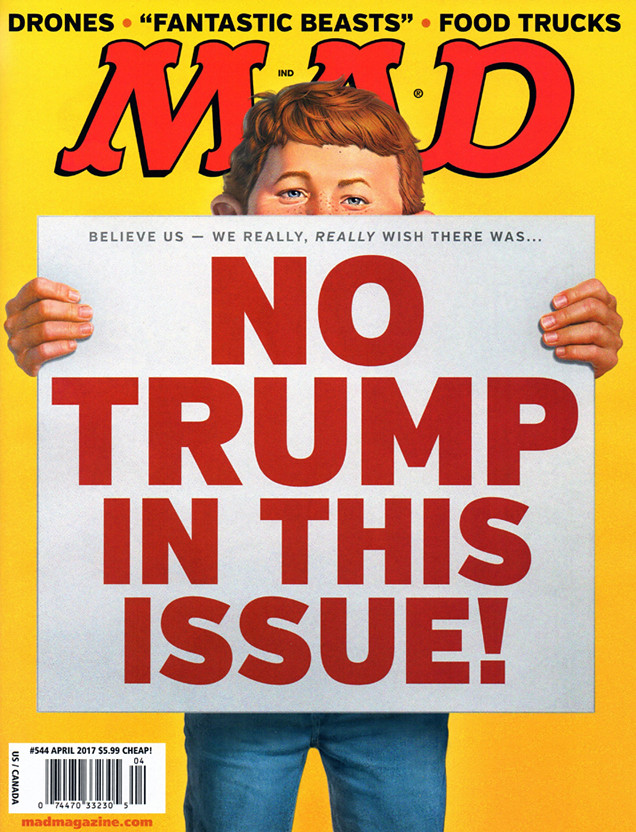 Had the opportunity to survey the current #544 issue of MAD magazine recently, and what frequently catches My attention is the always amusing depiction of short, erubescent, big-headed, gap-toothed Alfred E. Newman {who always appeared to be some sort of runtish inbred mutant}; but the cover message of "NO TRUMP IN THIS ISSUE", with small lettering offering the preface statement of "Believe us - We really, really wish there was...", which also reminds of Tenacious D's so-called "Tribute {the Greatest Song in The World}", not THE greatest song in the world, mind you, but just a 'tribute' thereunto. It appears that The Devil is indeed in the details.

Speaking of The Devil, probably one of the best issues I recall is #345 that featured a piece from the Beast Meets Jest Dept. entitled The Devil's Advocate, themed after The Black Flame magazine, in the wake of another 6/6/6 anniversary. I did have the occasion to xerox copy the segment and hellmail it in to Central for inspection... it was a hoot!

De-regeur, the issue is filled with a plethora of satirical illustrations from front to back, complete with back cover fold-in page. Spy vs. Spy is there, mentioning "martial arts throwing stars" {why not just say what they are: Shurikens?}. Includes some new art styles, but is lacking those amusing elongated characters.

This publication has been appreciated by Myself for as long as I can remember, read exuberantly at newspaper stands, comic book stores, libraries, etc., wherever they could be found, along with Cracked as well, and shall continue to be so into timelessness. ∞