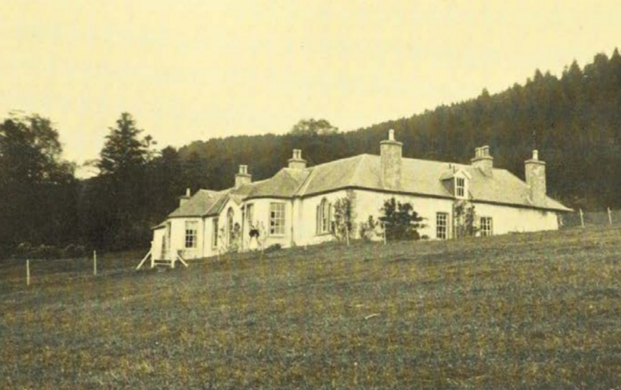 Well, not totally, but only a certain portion thereof, and quite salvageable. Upon the Winter Solstice of Satanalia, no less... a fire celebration. This is significant because it speaks to the dynamic that the house itself is a veritable elemental conductor, serving as a receptacle for natural etheric energies upon such a Sabbatic pinnacle. It is recognized the concentrated energy a house can radiate by considering Magus LaVey’s own phenomenal archetypal Black House, and subsequent others like Black House East in Poughkeepsie and BH North.

Is Hell trying to claim its own? Christian Arsonist? Accidental? It certainly is a location of Occult historical connotation, and as such, should be repaired to identical specifications.

I first became acquainted with Crowley through Man, Myth, & Magic encyclopedia of The Occult, and Fate magazine, then in Crimes & Punishment: History of Aberrant Behavior. It was always a fascinating read.

Crowley is a ceremonial magician & member of The Golden Dawn, the type of mystic that Solomon was, who in fact incorporated many of those practices into his own system he called Thelema, more akin to Rosicrucianism, Kaballism, & various mystical judeo-christian grimoires. These are all outlined in his Liber Al Legis {Book of The Law}, with "Magick In Theory & Practice" as an introductory primer.

On the other hand, Satanism was not codified as a religion & philosophy in a structured form until Anton Szandor LaVey did so in 1966 with the organizational founding of The Church of Satan, and subsequent publication of The Satanic Bible in 1969. It is simple to discriminate that the two texts are vastly different.

Of course, ignorant paranoid fundamentalists are eager to label anything they cannot understand as diabolical in some way, with some sort of occult appearance or terminology, in league with The Devil in some form, even though it may not be so, yet perhaps they may not actually know the difference after all, despite available information, or foster purposeful misinformation to generate fear, to falsely substantiate archaic superstitious fictions.

Ironically, this recent instance only adds to the allure, the mystery, the infamy of the house on the shores of Lochness, host to another notable inhabitant, that of the exploits of the so-called "Wickedest man in the world", thus remaining testament to its potent impact upon history, and perhaps with a philanthropic benefactor, should even be appropriately transformed into an occult museum, as it would have been for LaVey’s. ∞