Being that DRACONIA is a prospected, macrocosmic series of total environments, One's personal Lair is a veritable microcosmic combination of various Magical & Aesthetic dimensions as well. My personal Lair I refer to as The Noctuary, and therefore, as a fantastical extension of The Almighty Imagination, I shall refer to it as NOCTURNIA here. 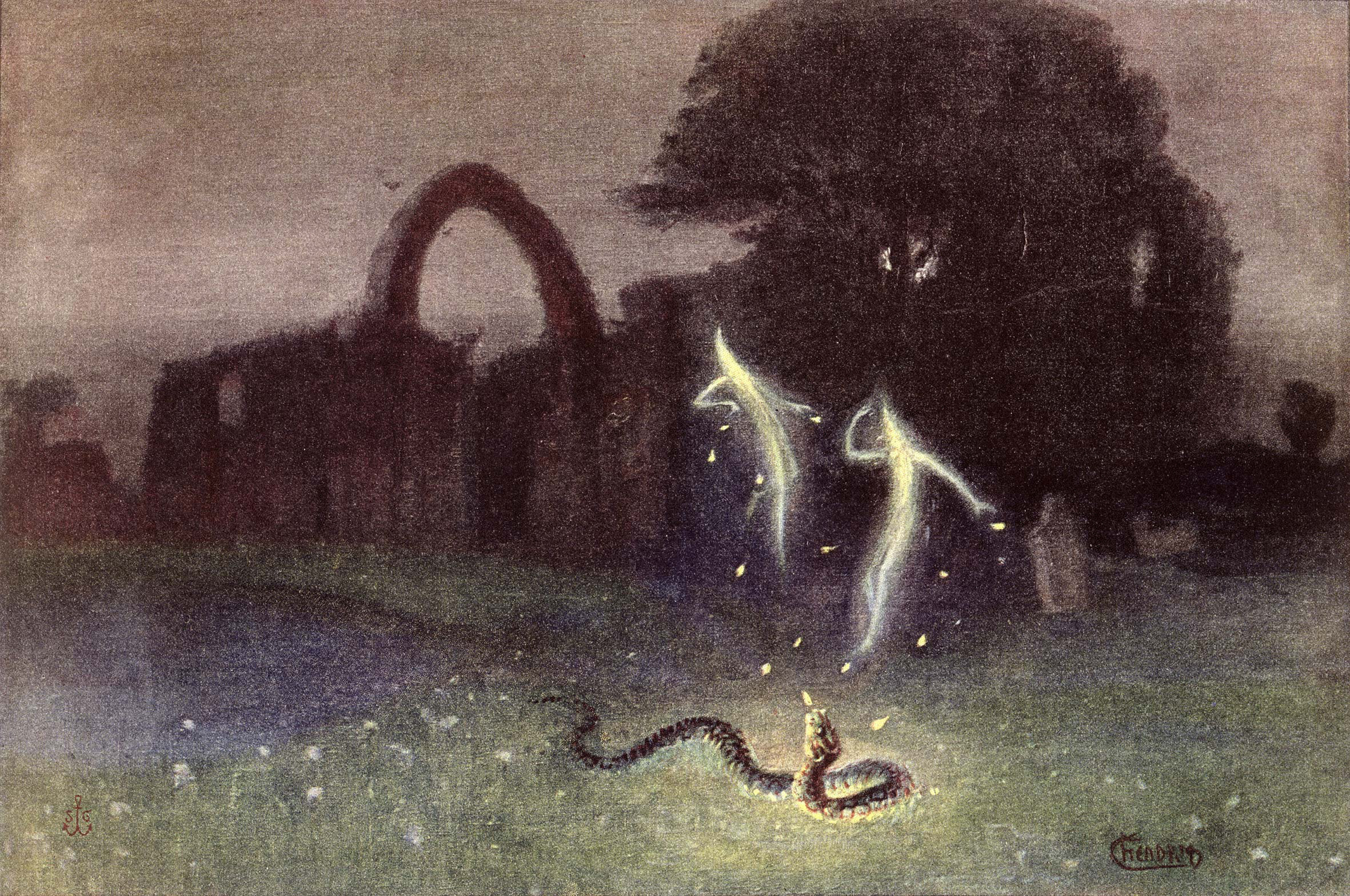 At the lead of the serpent host, follow the serpentine path through various secret lands within this enchanted world...

THE BOG
All things maritime and swamp themed herein. Often filled with fog & mist, marshlights, it holds its own whirlpools and mysterious creatures, strange sounds and miasmic eminations culminate. THE WITCH'S PATCH
Where the pumpkin patch kids dwell, nestled warmly in their enfolded leaves at night, happy glowing puddins 'n' pods open to allow them to emerge to play and munch. Sometimes, if you listen carefully, you can even hear them singing sometimes. Accompanied by their respective hairy creatures, all is overseen by Otis Lee who cares for them all.

THE SHADOWOODS
Several darklands set within the thick black forest framing The Path.

THE PIT {A.K.A., 'Gates of Hell'}
Immediately to The Left, two fearsome sentries joined by a massive chain flank a tall portcullis which encloses the realms beyond. On certain nights, you can see a Sorcerer with hellflames casting fearsome shadows and echoing incantations.

THE TREEHOUSE {'Castleberry'}
Evolved into a mansion, Pablo Bear, son Pablito and Sarah Berry live here {"home away from home"}, with frequent visits from the beloved cabbies. Gilla Gorilla also has a room, and tends the garden; along with Mr. Nanners the chimp who hangs around with Turboboy Mikey a lot. Tea & coffee, punch 'n' pie, cake and cookies are often served, and makes an ideal meeting point for field trips and foraging adventures. Accessed either by a weighted pulley lift or rope ladder. A veritable playhouse with swings, spiral slide, hammocks, cots, & nap quarters. DRACAVERNS {The 'Drac Cave'}
Over the veiled walls encircling The Pit, rests this Labyrinthine cavernous region inhabited by a mighty Black Draegon, and a center of communication, for both business and amusement, wherein myriad wyverns travel far and wide to deliver diabolical messages all over the world. His growls can be heard resonating deep within, especially in sleep.

MONSTER PASS
Inhabited by The Monster Twins & a two-headed hydra.

HELLFIRE VALLEY CANYON
Volcanic Hellfire Mountain spouts flames atop its summit, and contains a subterranean 'Hellmouth' cave {or Belial's Belly} with stalactite and stalagmite jaws filled with fire and brimstone where the sacrificial offerings of Nocturnia are prepared.
Across the Valley of Cloven Hoofs are two lagoons featuring Geryon Geyser Hot Springs and Leviathan Falls which pour across unholy receptacles to purify the Feasts of The Beast.
Goblin Mountain {Pox Peak}: That which is responsibly disposed for monetary commerce.
The Thorny Thickets {Jungle jumble, or 'The Attic'}: A motley melange of oddments resurrected as needed. ∞
Tags: dracling, dracumentary, haunted noctuary, infernal progeny, lair decor, nature, noctuary, oddities, total environment
Subscribe

Posts from This Journal “noctuary” Tag