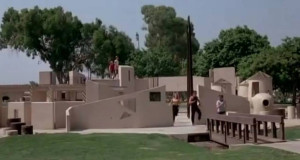 I was recently reminded of this marvelous maze while watching an episode of Knight Rider entitled "Killer KITT" {though the park does appear in other episodes in several background shots as well as varying areas throughout the rest of the park like the playing field}. Known as The Labyrinth or Maze park, this is Sherman Oaks Park, now also known as "Castle Park".

This was a semi-regular Y Camp destination in remmus to spend the day, and otherwise just independently going year around, and it is great fun. I think the only thing I would foreseeably modify would be painting it stone gray or black {even "shades of black" - that is to say, various colors at their absolute darkest}, with or without textures.

Of course, the labyrinthine theme is reminiscent of HELLRAISER and LABYRINTH.

There are varying sections throughout this labyrinth, with various levels or "stories", including a "jail"-like barred space with bench {however, this particular area tended to smell funny sometimes, like a lingering scent probably left over from hobos spending the night; otherwise, it was usually quite freshly cleaned early in the morning before arrival}, a tower to climb up and down within {with nice views up dresses}, various tunnels honeycombed throughout, other smaller bridges, additional 'hidden' stairwells, slides, climbing rope & ladders, false walls, all sorts of cubby-holes high and low in which to hide, watch, lay in wait, surprising playmates, even a central spire acting like a giant sundial.

A family could make an afternoon of it, reposing in the nearby grassy areas or roofed picnic tables. On the other side of the park is the baseball field and benches.

Seems a themed attraction was relocated nearby known as "Castle Park", yielding an enchanting ivy-covered castle structure, with minigolf, dragons, a moat, medieval decor, snackbar, while the former labyrinthine edifice was integrated into the recreational park a couple blocks away. ∞ 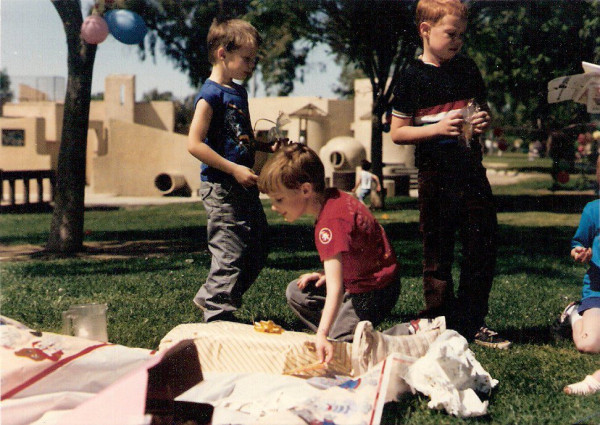